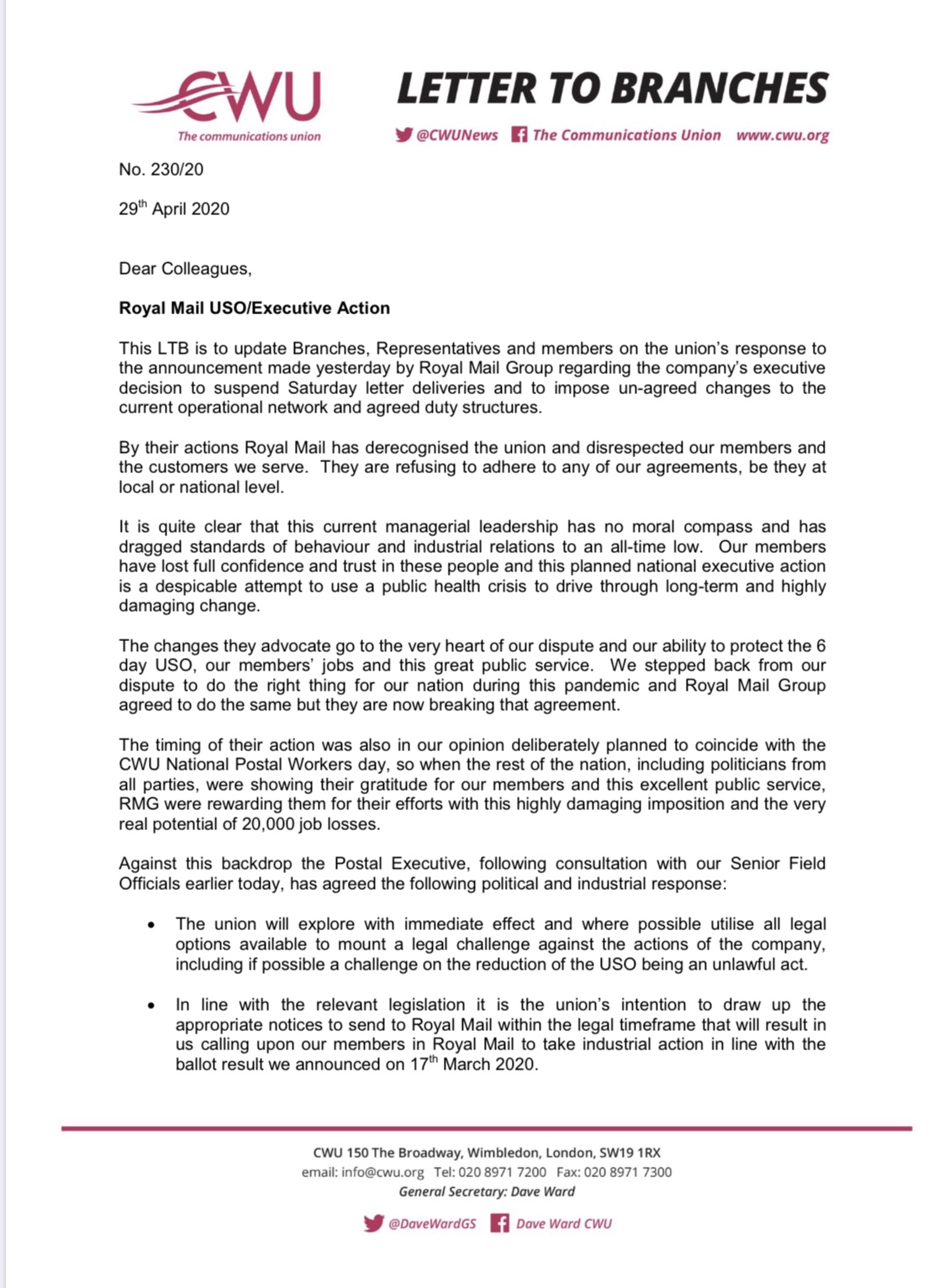 EVERY SINGLE POSTAL WORKER IN THE UK NEEDS TO SEE THIS

This LTB is to update Branches, Representatives and members on the union’s response to the announcement made yesterday by Royal Mail Group regarding the company’s executive decision to suspend Saturday letter deliveries and to impose un-agreed changes to the current operational network and agreed duty structures.

By their actions Royal Mail has derecognised the union and disrespected our members and the customers we serve. They are refusing to adhere to any of our agreements, be they at local or national level.

It is quite clear that this current managerial leadership has no moral compass and has dragged standards of behaviour and industrial relations to an all-time low. Our members have lost full confidence and trust in these people and this planned national executive action is a despicable attempt to use a public health crisis to drive through long-term and highly damaging change.

The changes they advocate go to the very heart of our dispute and our ability to protect the 6 day USO, our members’ jobs and this great public service. We stepped back from our dispute to do the right thing for our nation during this pandemic and Royal Mail Group agreed to do the same but they are now breaking that agreement.

The timing of their action was also in our opinion deliberately planned to coincide with the CWU National Postal Workers day, so when the rest of the nation, including politicians from all parties, were showing their gratitude for our members and this excellent public service, RMG were rewarding them for their efforts with this highly damaging imposition and the very real potential of 20,000 job losses.

Against this backdrop the Postal Executive, following consultation with our Senior Field Officials earlier today, has agreed the following political and industrial response:

🛑 The union will explore with immediate effect and where possible utilise all legal options available to mount a legal challenge against the actions of the company, including if possible a challenge on the reduction of the USO being an unlawful act.

🛑 In line with the relevant legislation it is the union’s intention to draw up the appropriate notices to send to Royal Mail within the legal timeframe that will result in us calling upon our members in Royal Mail to take industrial action in line with the ballot result we announced on 17th March 2020.

🛑 With immediate effect Representatives and members should not cooperate or give any local agreement to any deployment of management’s plan.

🛑 In defiance of the company’s unilateral action, all members should continue to adhere to their currently agreed duty/attendance arrangements.

🛑 The union will issue further guidance on all aspects of H&S standards and compliance with HMG guidance relating to social distancing/PPE within the workplace, the legal obligations of the employer to comply with them as well as the legal requirement for the employer to consult the recognised Trade Union on changes in the workplace which have health and safety implications.

🛑 The DGS(P) Department in conjunction with the General Secretary, Postal National Officers and the Head of Communications will develop a high profile communications strategy, including as a priority an individual letter to all postal members that sets out and exposes in detail the actions of the company and reaffirms the CWU commitment to defend its members, their terms and conditions and the public postal service. The union via the office of the General Secretary will continue to explore all political avenues in challenging Ofcom and the Government.

YOUR VISUAL GUIDE TO THE NEW CWU APP