Ballot closes 21 June 2017 (14:00)
Any enquiries regarding this Letter to Branches should be addressed to the Senior Deputy General Secretary’s Department on telephone number 020 8971 7237, or email address sdgs@cwu.org.
Yours sincerely,
TONY KEARNS 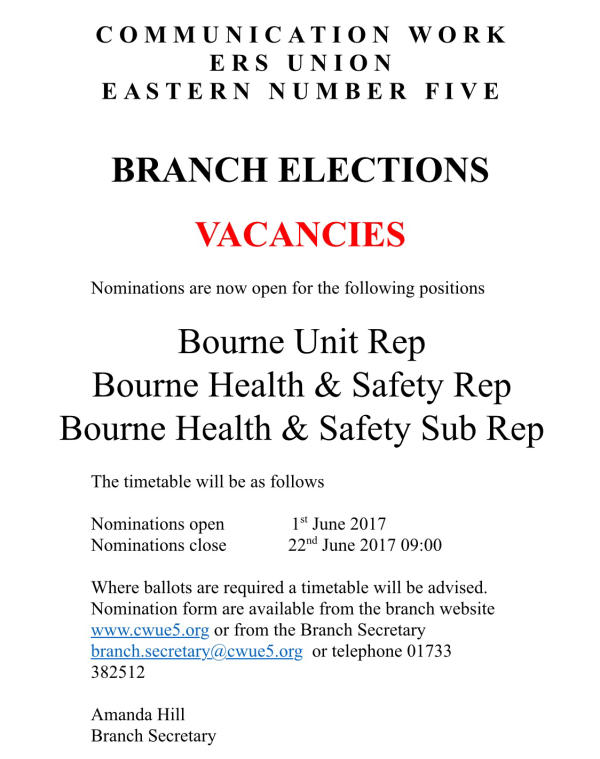 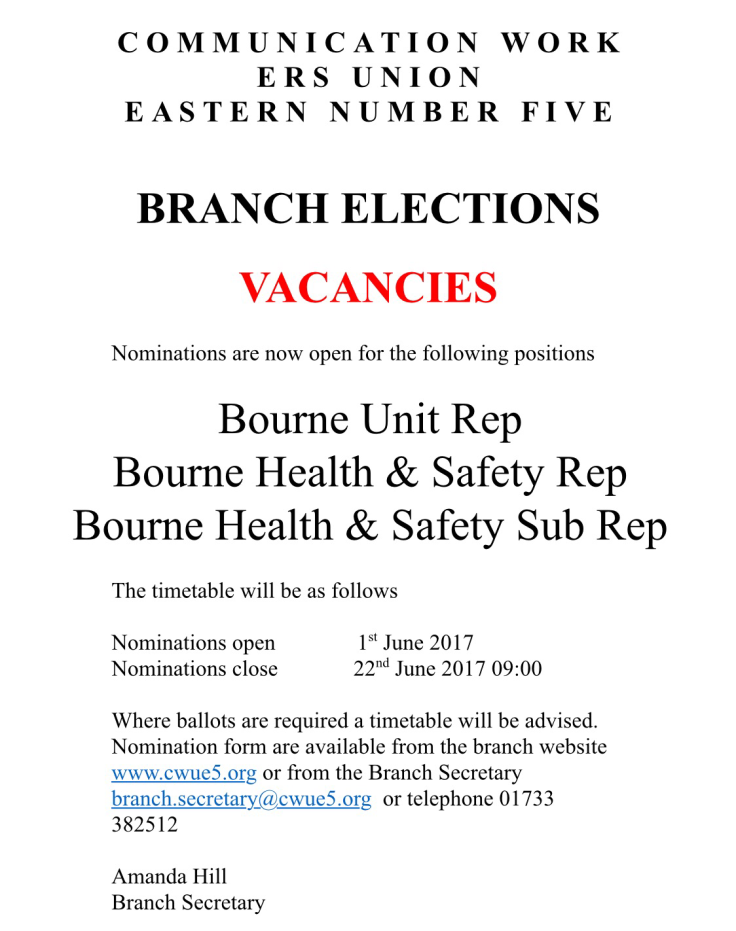 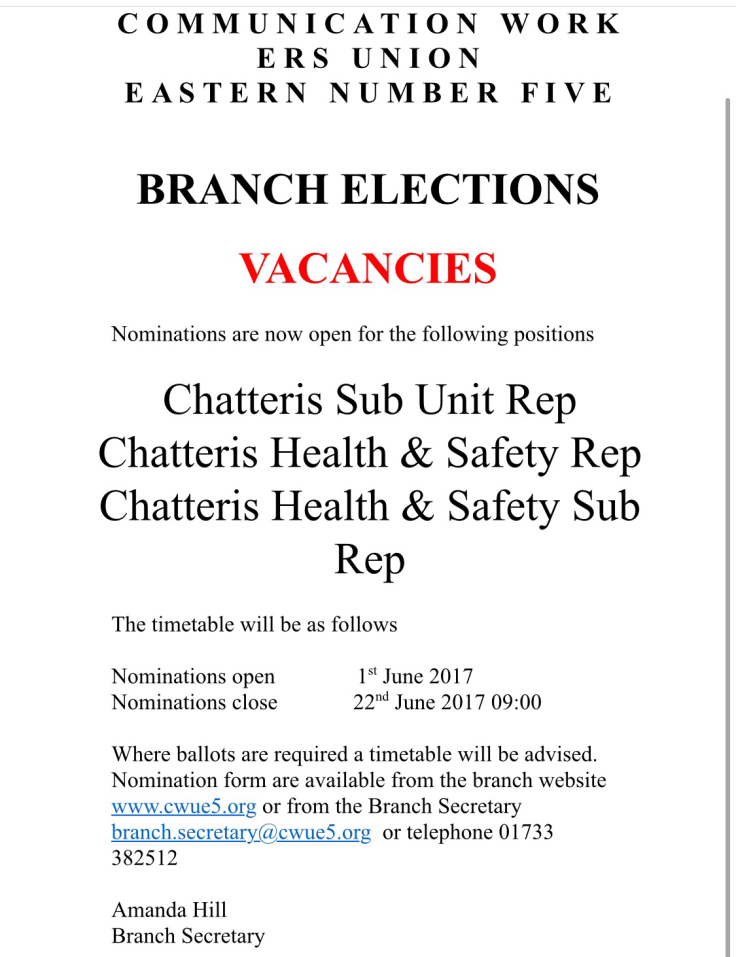 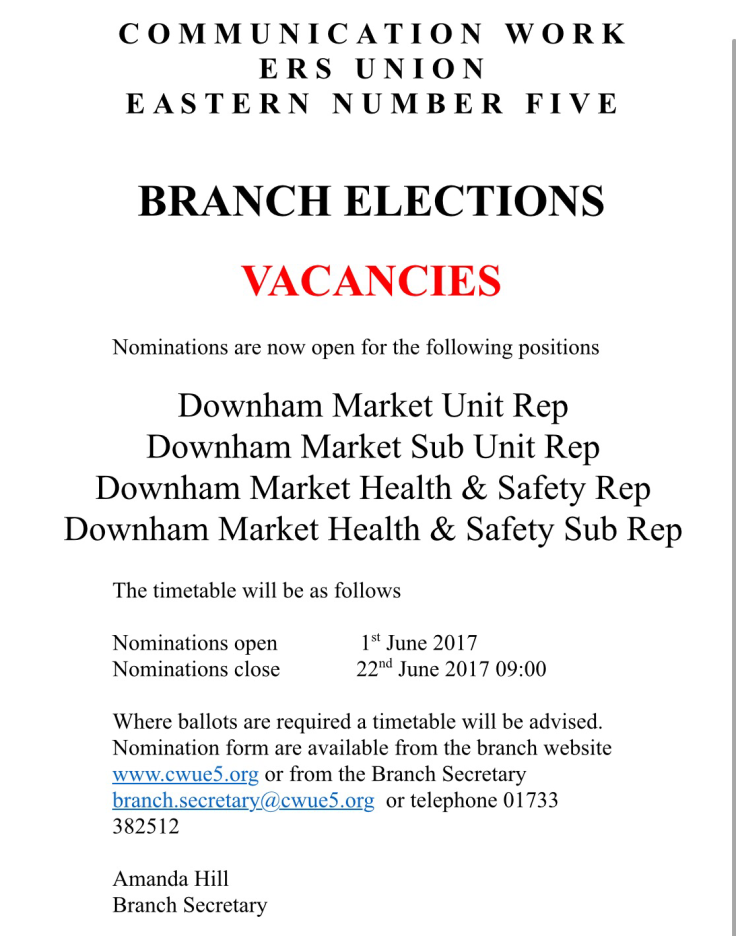 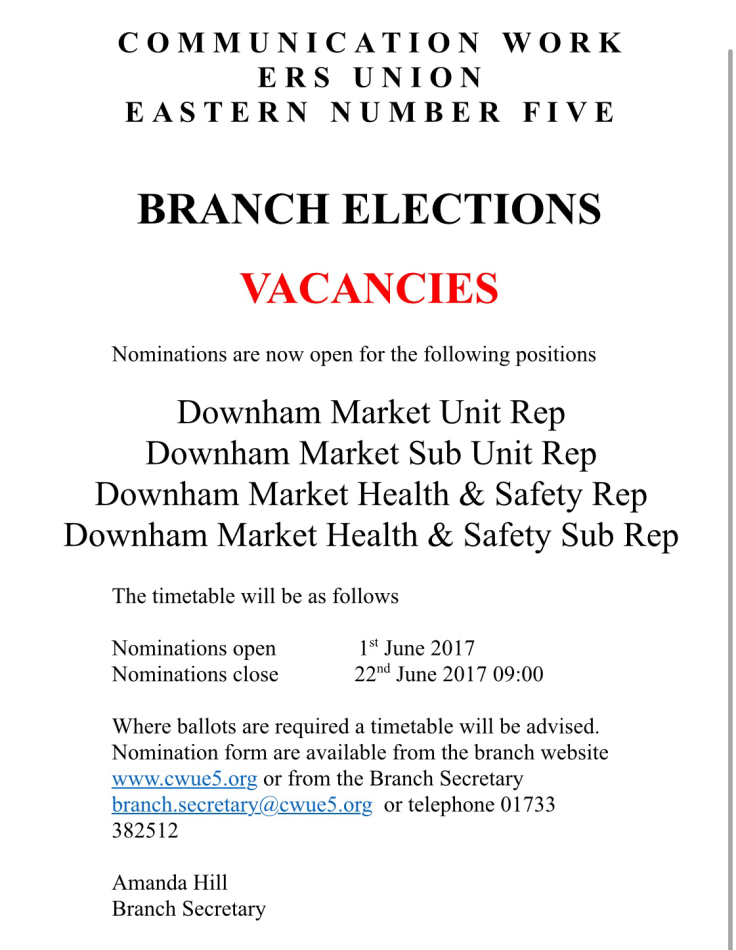 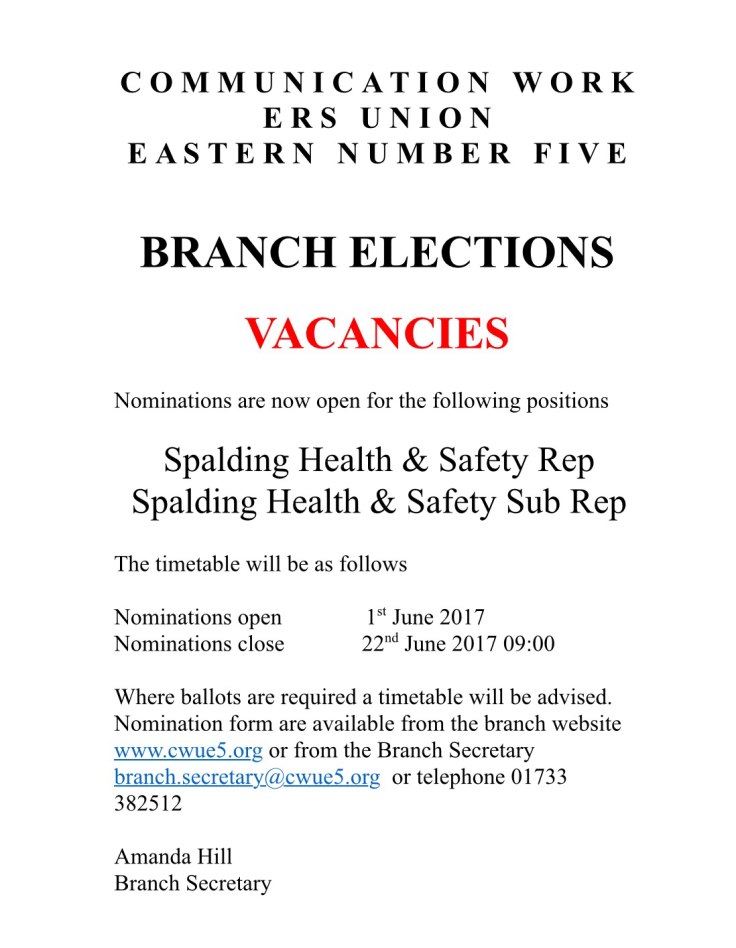 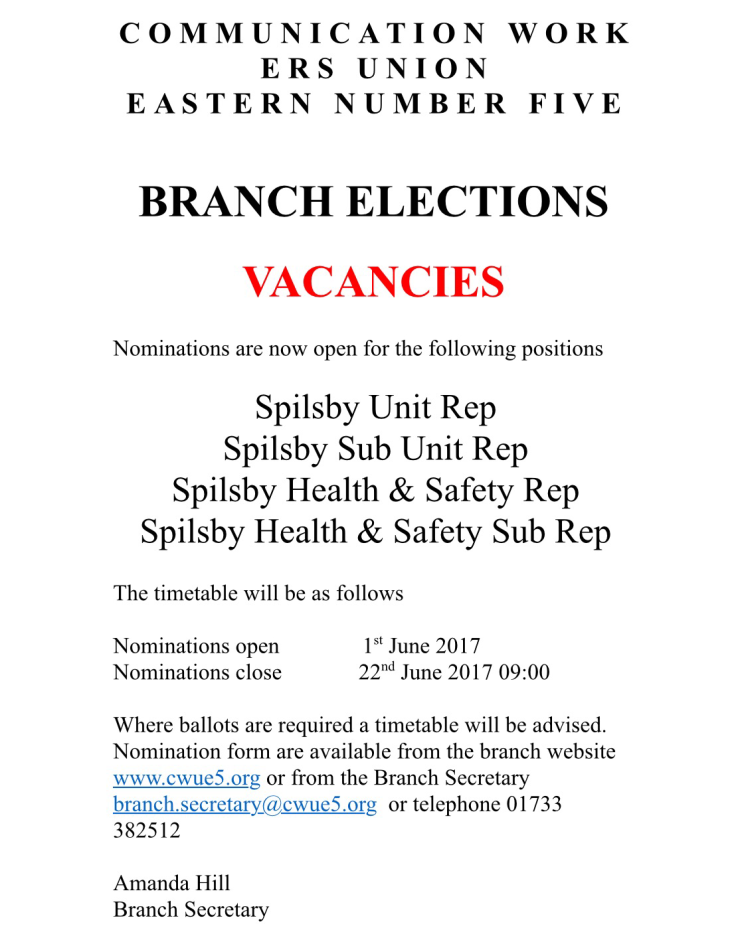 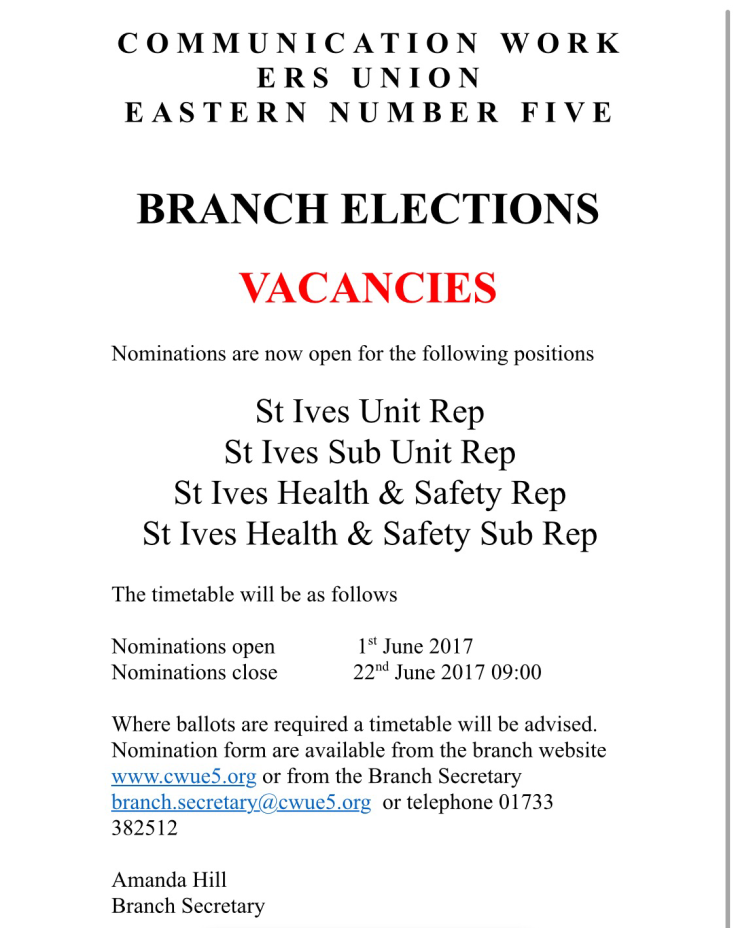 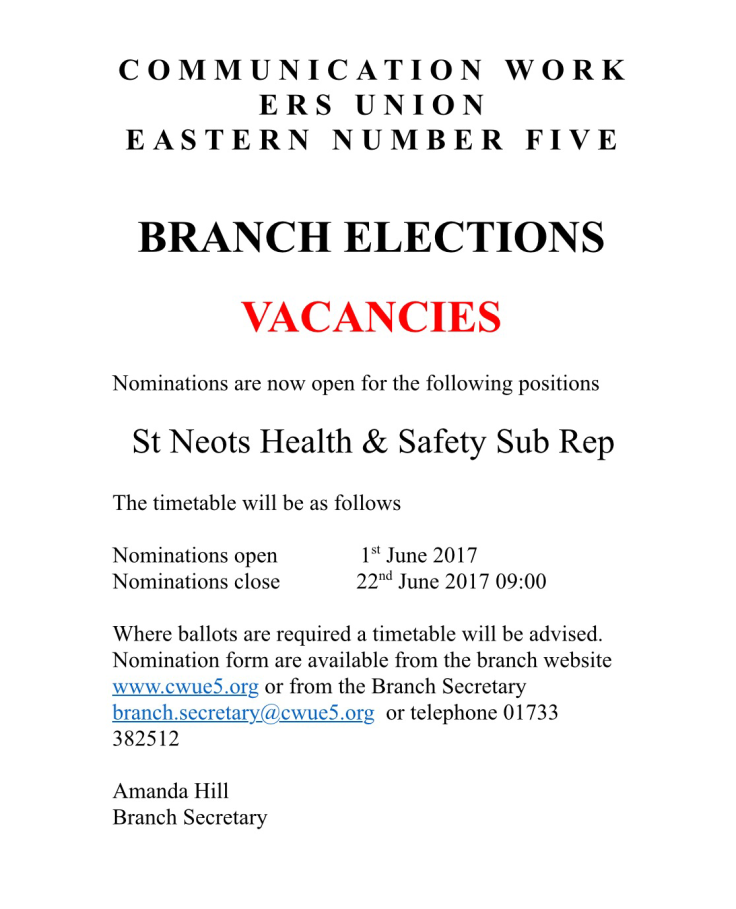 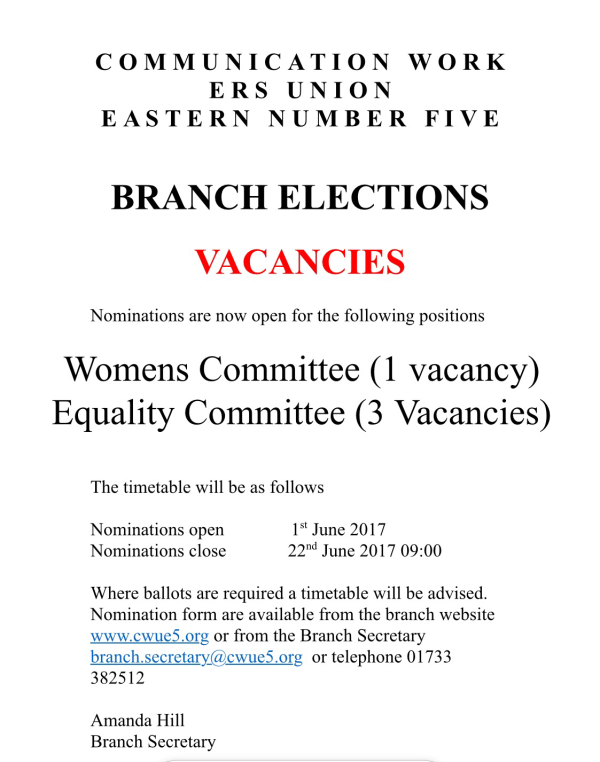 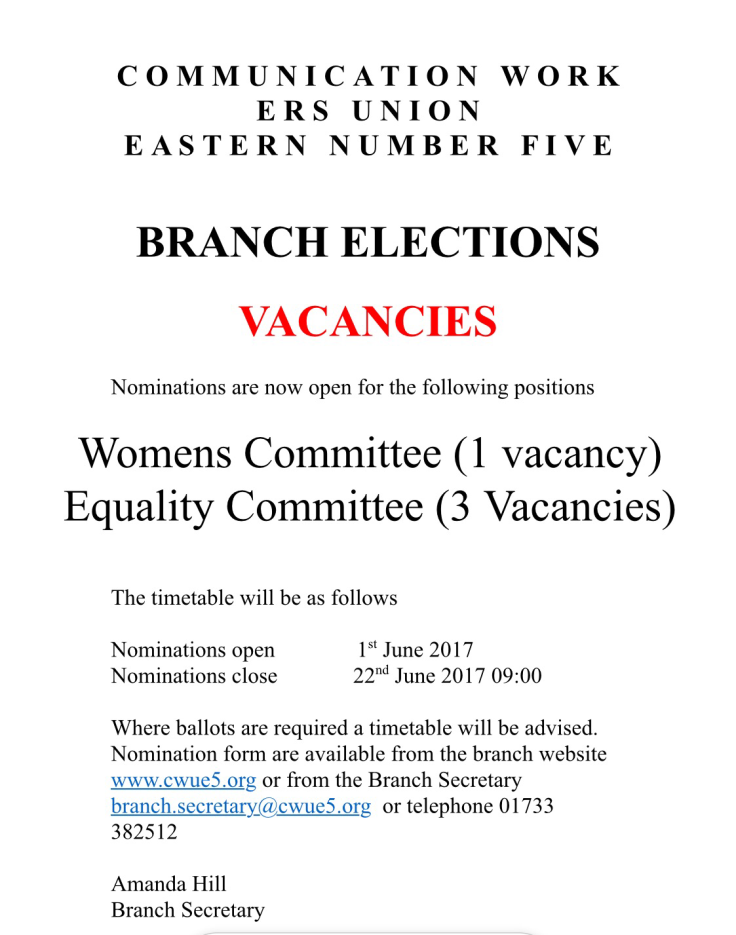 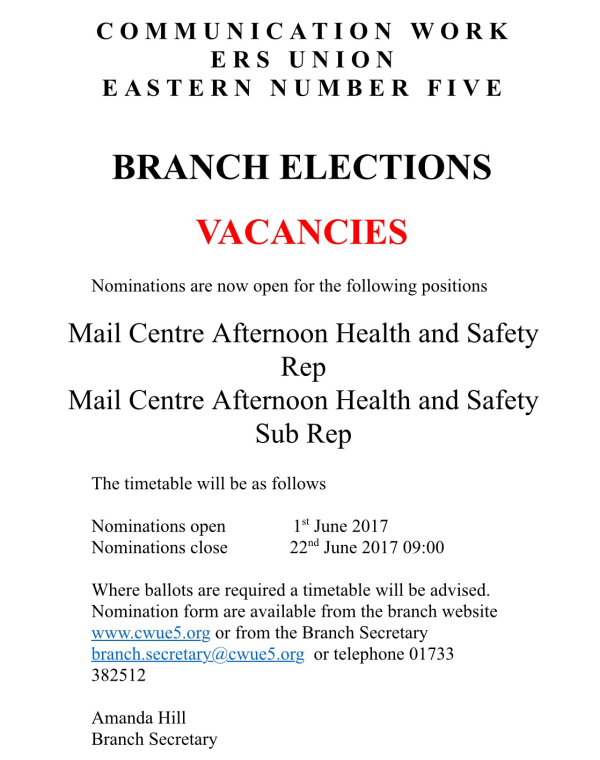 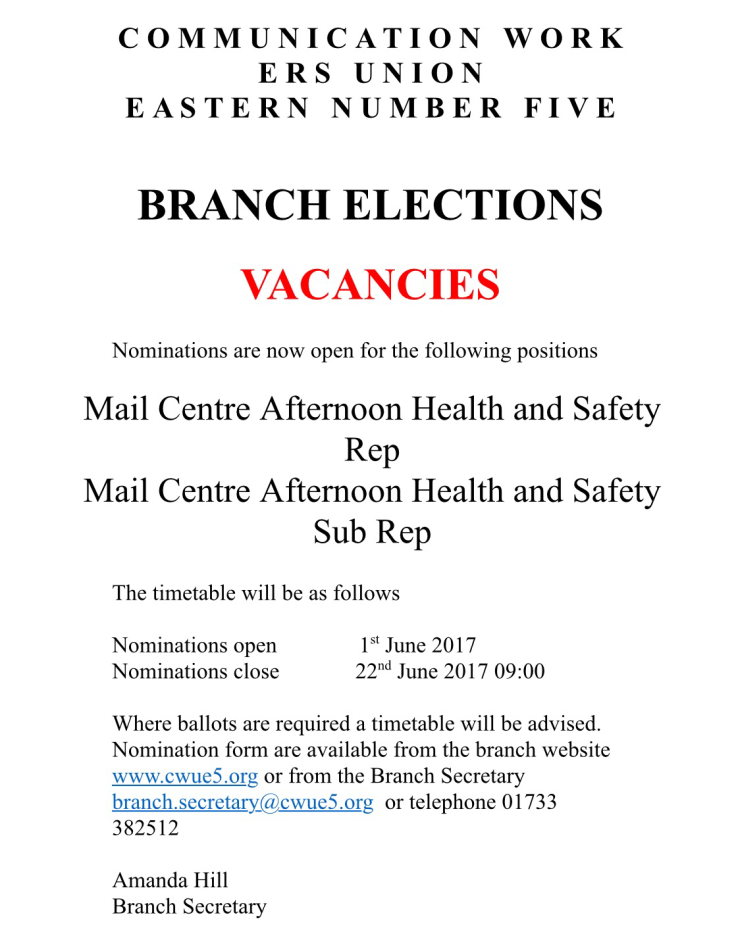 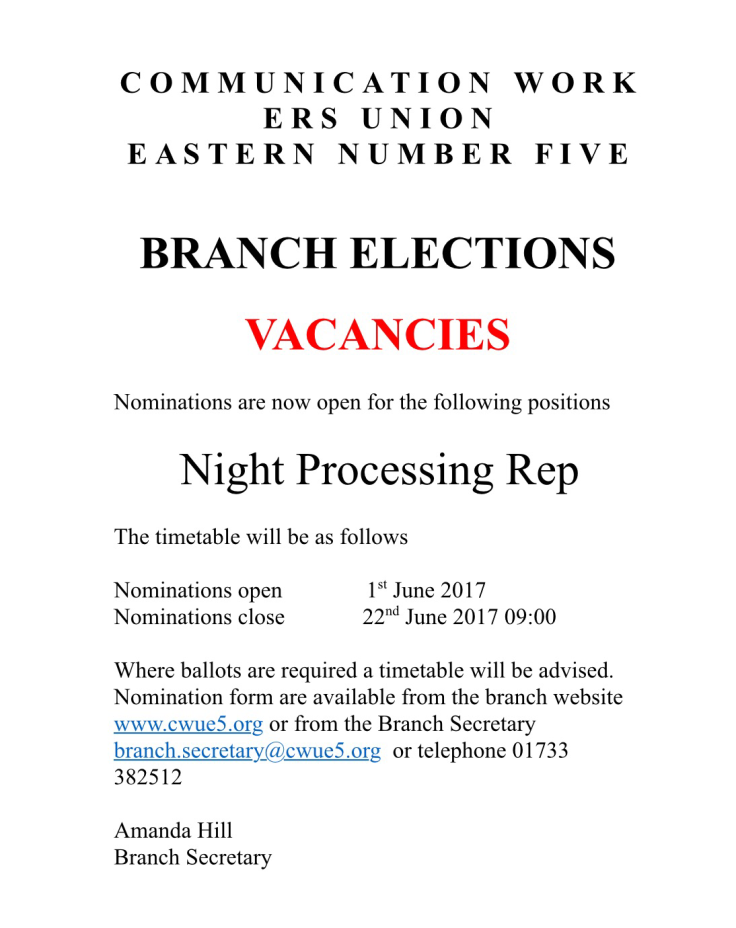 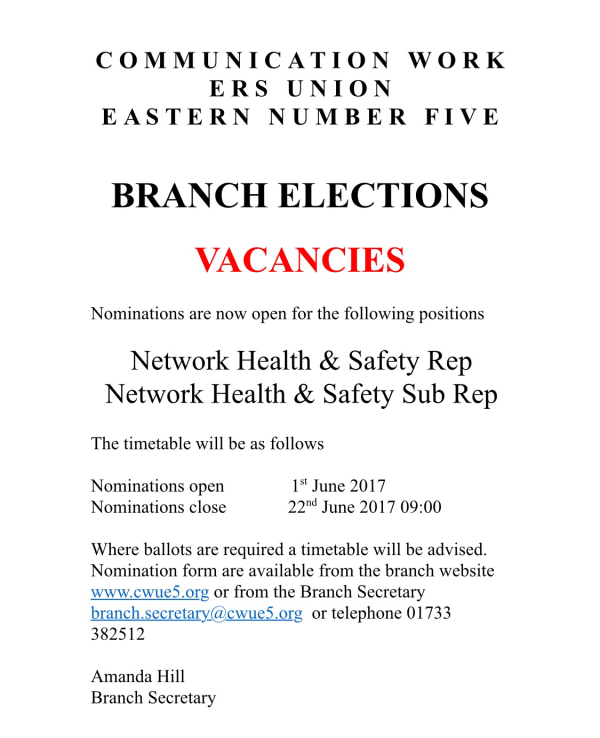 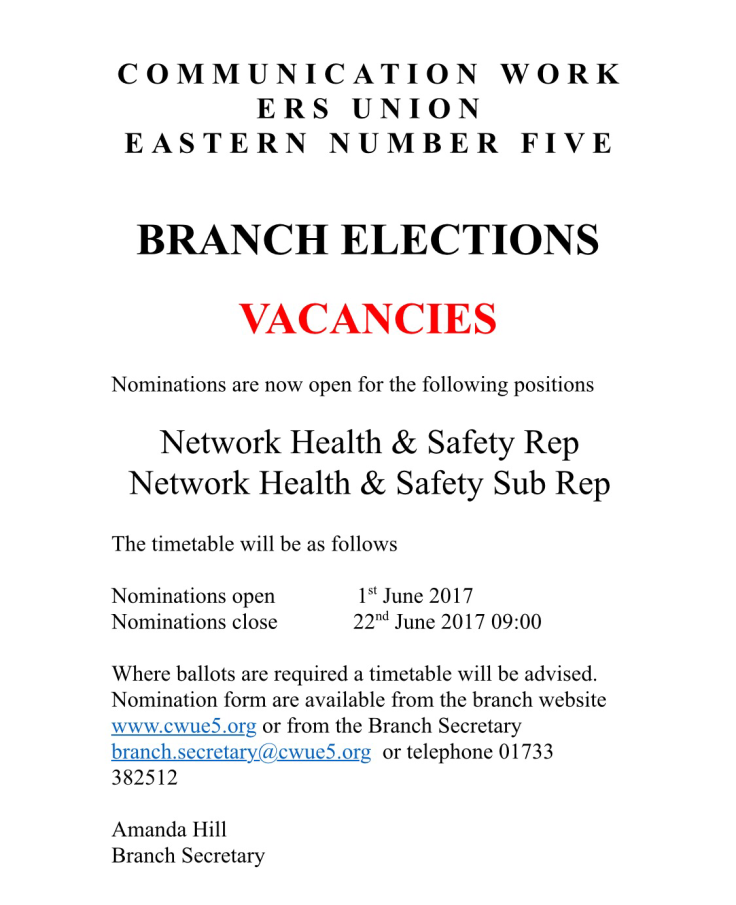 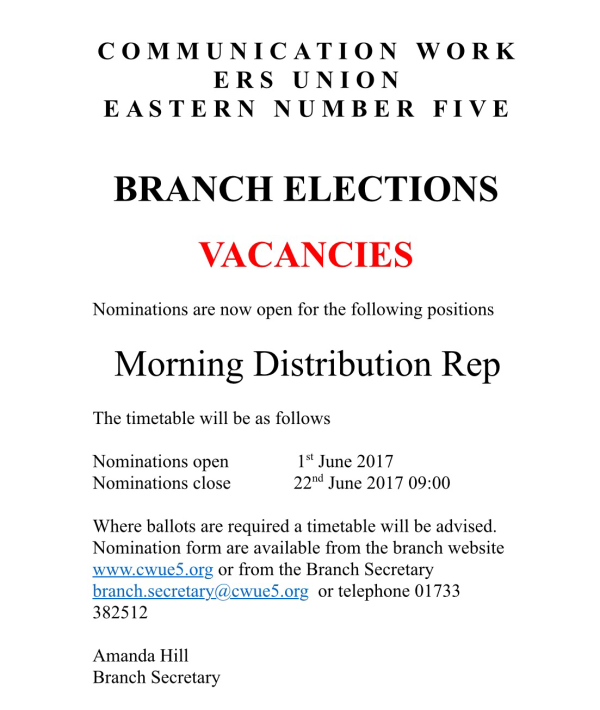 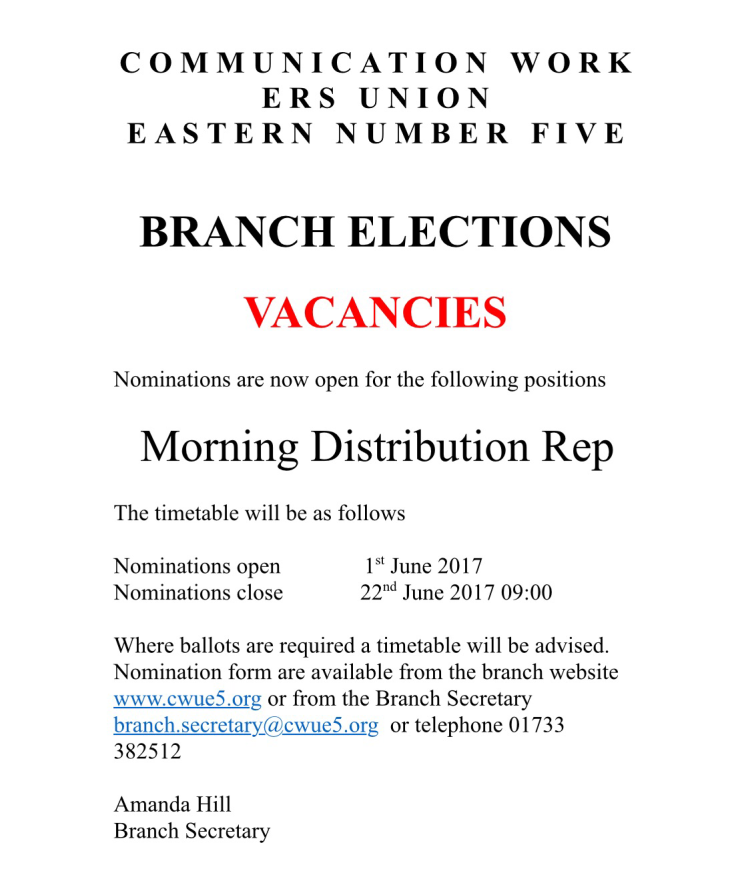 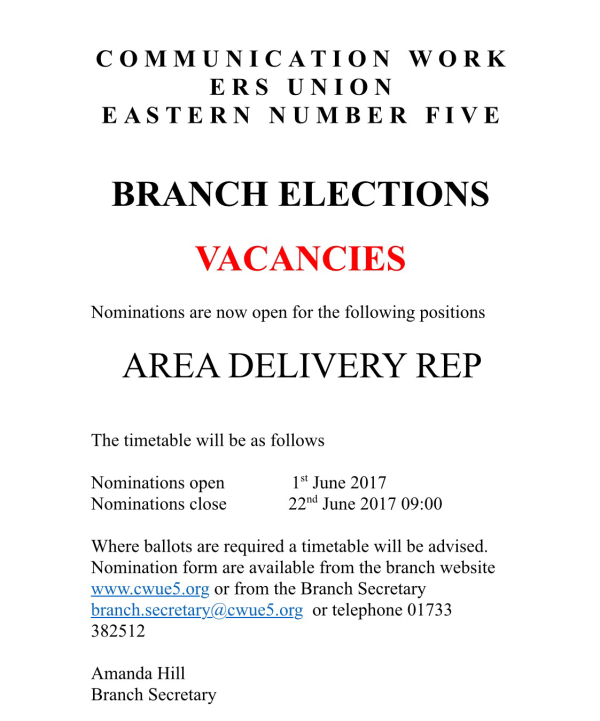 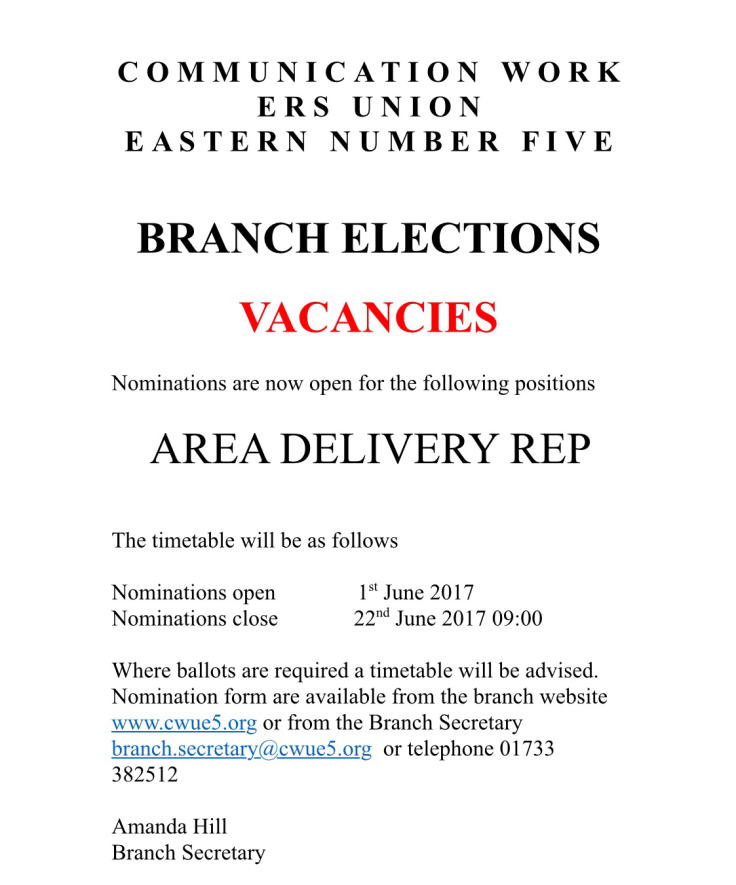 Further to LTB 069/17 published under the name of Dave Ward, General Secretary.

I am writing to advise Branches that an interim review has been carried out and a number of changes to the NDC Byelaws have been agreed by the NEC at its meeting held on the 25th May 2017.

In determining my approach to the review I have taken an overview of all the cases referred to the NDC since 2010. These total 97 cases, of which 37 involve two reps from the same branch, 9 resulted in a sanction and 4 were currently ongoing, with the remainder either withdrawn or there was no prima facie case to answer.

I was convinced that a large percentage of the cases that were raised under National Rule 14, were not serious breaches of National Rules, but were, indeed, a breakdown of relationships with individuals at branch level. I, therefore, took the view that we needed to put in place a procedure which allows for a swift intervention at local level, thus avoiding the need to progress every case to a full NDC hearing.

I, therefore, proposed and the NEC agreed that we put in place a system which allows for an initial vetting of the complaint, which can then be classified as either a dispute or a disciplinary issue, depending on the nature of the complaint. There was enough evidence to suggest that there was no need to elevate the vast majority of these complaints to a full NDC hearing and that there was an opportunity to resolve these issues at local level via an informal resolution procedure. The aim of the new procedure is to create an environment where a quick and equitable solution can be found, with only the more serious breaches of the National Rules being processed to a full NDC hearing.

These initial changes to the byelaws do not alter the formal NDC process that is contained within National Rule 14. What they provide is a process which will allow for an informal resolution to commence prior to any charge being considered by the full NDC and in the event a solution cannot be reached then the informal resolution process will cease and the case will revert to the full NDC for consideration.

The NEC have also agreed a change to the make-up of the NDC which will provide greater flexibility and also ensure we have the correct gender balance within the NDC panel members.

At its first meeting after their election the NEC will appoint six of its members, two of which must be female, who will serve as NDC Panel Members. Any three members will constitute a Disciplinary Committee with the full authority to deal with and determine on all matters calling for disciplinary action under the rules.

Delete existing Byelaw 2 (a) and renumber the existing paragraphs accordingly.

Within seven days of notification from the General Secretary’s Department details of the charge will be considered by the National President or Vice President and the NDC Officer who will determine if the nature of the charge is classified as either a dispute or a disciplinary issue.

Disciplinary issues should, in the main, be incidents of a serious breach of national rules.

If it is determined that the charge is a dispute then it will be dealt with via informal resolution at local level with the assistance of an appropriate CWU representative appointed by the NDC Officer. The aim will be to conduct a meeting with all parties concerned within 14 days.

Informal resolution will only take place when both parties have confirmed that there are no outstanding employers’ procedures contemplated or in progress against either of the parties.

In the event a resolution is achieved at local level the matter will conclude at this point.

In the event a resolution is not achieved the charge will revert to the NDC Officer, who along with the National President or Vice President, will consider the details of the informal resolution and will decide one of the following actions.

Revert case back to local level for further discussions

Forward charge to General Secretary’s Department to be dealt with under current NDC byelaws.

The information contained within the informal resolution report shall remain confidential on a without prejudice basis and must not be used as part of the NDC process.

All existing paragraphs under Byelaw 3 are to be renumbered accordingly.

It is our intention to trial the new informal resolution process whilst at the same time continuing to review all aspects of National Rule 14, with the aim of submitting a proposed rule change to Annual Conference 2018.

NDC Byelaws affected by the change, are shown below for your information:
NATIONAL DISCIPLINE COMMITTEE – BYELAWS

These byelaws are made by the National Executive Council (NEC) pursuant to Rule 14, Section 3, paragraph 3 of the Union’s Rules and may be amended or rescinded at any time by resolution of the NEC.

At its first meeting after their election, the NEC shall appoint three of its members to constitute a Disciplinary Committee, with full authority to deal with and determine all matters calling for disciplinary action under the rules.

There shall be named substitutes to replace any or all members of the National Discipline Committee if they are not available.

A member of the NEC who has any direct personal interest in the outcome of the proceedings shall not be permitted to participate in any such case.

It shall not be necessary for the NDC members deciding the prima facie case to be the same members as those who subsequently hear the case in full.

No member of the NDC hearing a case shall participate in the decision on that case unless they have been present throughout the hearing.

Upon receipt of the notification of a charge against a member, the General Secretary shall ensure that the charge is put to the individual and their Branch without delay.

If you have any queries regarding the above, please contact Tony Rupa, Assistant Secretary/NDC Officer, Communication Workers Union, 150 The Broadway, Wimbledon, London, SW19 1RX. Telephone 0208 971 7444 or via email trupa@cwu.org

Further to LTB 228/17, dated 20th April 2017, I have not had much of a response to the LTB, therefore, I am sending out this reminder of the BAME Officers – One Day Event.

Can Branches please inform newly elected BAME Officers who may wish to attend this one day event. Unfortunately, if I do not have enough people attending, I will have to cancel this date.

This is a course for those who did not attend the one day BAME Officers event last time and have attended BAME leadership courses over the last year.

Details for the event are as follows:

It will be an opportunity to meet members of the Race Advisory Committee and to gain some valuable guidance to maximise work around this role. Equally as important, some exercises will be set up to allow a two-way process, so that we can establish how our BAME Officers see the role working.

Those who are interested in attending will need to request expenses etc from their Branch.

Please RSVP with the names of BAME Officers attending to equalopportunities@cwu.org

Any enquiries regarding this LTB should be referred to the Equal Opportunities Department.

MEMBERSHIP RECORDS
It is now extremely important that we step up our work in anticipation of the need to put in place arrangements to implement the terms of Motion E5 carried at this year’s Postal Conference. The emergency motion set a timescale of August 2017 to conclude an agreement around the 4 Pillars campaign. The negotiations relating to this are ongoing and updates will continue to be communicated by Terry Pullinger DGSP.
We have already contacted Branches via LTB’s 285/17 and 289/17, as part of the way we review and prepare aspects of our membership records to ensure we are able to carry out that part of the Emergency Motion E5 that deals with the issue of industrial action.
The purpose of this LTB is that in the event those discussions are unable to conclude with an agreement we will have to plan for the prospect of an Industrial Action ballot. Branches will recall that in 2013 we placed additional resource (Martin Akerman) into the SDGS department to oversee and co-ordinate that activity. We can confirm that the arrangements will remain exactly the same for this project.
Accordingly and with immediate effect we require all branches to identify a dedicated individual who will be the contact point between the branch and the SDGS department to make certain our membership records are updated and remain correct.
We need to emphasise that this is an extremely important activity that will be essential to us implementing the 4 Pillars campaign and any resultant industrial action ballot.
From this point on there will be an extremely close working relationship between the DGS(P) and SDGS departments on this issue to ensure this union acts as one in moving forward at such an important time.
We now require that Branches identify the individual to act as the contact point and that the name and contact details of that person should be sent to makerman@cwu.org by no later than Friday 30th June 2017.
A large amount of good work has taken place amongst our members to gain support for the 4 Pillars campaign and the actions required that are contained within this LTB are an equally important aspect of the campaign.
We look forward to receiving the information requested and would like to thank Branches in advance for their assistance on this important matter.
Any enquiries regarding this Letter to Branches should be addressed to the Senior Deputy General Secretary’s Department on telephone number 020 8971 7237, or email address sdgs@cwu.org.
Yours sincerely,
TONY KEARNS
SENIOR DEPUTY GENERAL SECRETARY
TERRY PULLINGER
DEPUTY GENERAL SECRETARY (POSTAL)