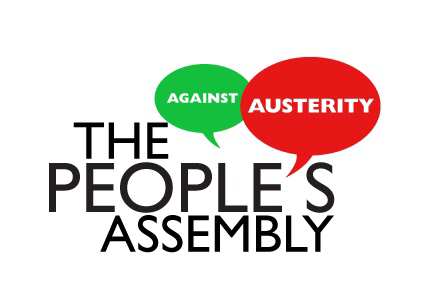 At our national conference on 5 December in London it was decided that one of the main priorities for the People’s Assembly was to mobilise for a national demonstration in the first half of 2016.
After discussions with many organisations and unions we are excited to be able to announce the first details of that demonstration.
March for Health, Homes, Jobs & Education | End Austerity Now

Help us Launch the Demo

Next week we will have a public launch in the media and on social media when we have more details and we want your help. We will send more info early in the week about how you can help but please get ready to share and spread the word
We face a vicious government who prioritise only the richest in society, big business and the corporations. With the potential of 4 more years of a government who will continue dismantling the NHS, furthering the housing crisis, taking away workers rights, and attacking our education system – it’s time to get back on the streets and to demonstrate the majority won’t take it.
The Tories aren’t going to back down easily so it’s up to each and every one of us to get out and march for our Health, Homes, Jobs and Education.
Last year saw massive political shifts. After the devastating general election result, where the Tories gained a tiny majority, it became clear that that result did not reflect the views of the county.
Immediately after the election, protests, meetings, rallies and demonstrations took place up and down the country culminating in one of the biggest demonstrations in Britain for years with 250,000 people bringing London to a stand still on the End Austerity Now Demonstration organised by the People’s Assembly.
Since then, the surge in support for anti austerity politics, being put forward by Jeremy Corbyn, is yet another indication that people are fed up with policies that only represent those at the top.
See you in London on April 16. Let’s make this the biggest demonstration possible. Transport will be arranged from across the country, full details inc. time, assembly point, route and speakers will be announced soon.
Solidarity,
The People’s Assembly Against Austerity
http://www.thepeoplesassembly.org.uk/