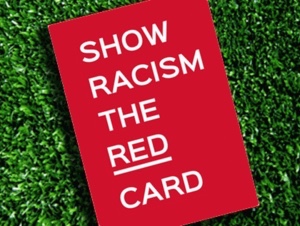 SPORTS stars and MPS have come together to back a new Black Lives Matter campaign from anti-racism educational charity, Show Racism the Red Card.

This Friday (July 24) Show Racism the Red Card is launching a new video, ‘We Can’t Breathe’, to coincide with the Black Lives Matter movement.

The video which is being made available on YouTube, shows how the eight minutes surrounding George Floyd’s death in Minneapolis back in May went on to create a global reckoning.

It explores the horrifying murder and the resulting aftermath, including details of the protests which have since taken place all around the world in what can be described as the biggest civil rights movement in recent history.

Several sports stars and MPs such as David Lammy, Douglas Ross, Zarah Sultana, Shaka Hislop, Colin Charvis as well as Premier League host Manish Bhasin, are also supporting the campaign, to ensure conversation around the issue does not die down.

Appearing in the video, David Lammy, Shadow Justice Secretary, said: “You assume and hope and pray that at some point the officer might take his knee of his neck and then you watch this man die. But the truth is, I’ve seen these images before, I know that apprehension that comes in my stomach because I’ve felt it before. It wasn’t a shock but it was a revulsion.”

Douglas Ross, Tory MP, added: “He was pleading for his life, he was making it so clear that he couldn’t breathe. The point that really struck me was when the pain was moving through his body – his stomach was hurting, his neck was hurting. He was promising to comply with what was being asked for but wasn’t given that opportunity. while he was still conscious and able to make that plea, those pleas were ignored and those who were witnessing this were also trying to act on his behalf and pleading for his concerns and for him to be listened to. Sadly we witnessed a life being lost which never should have been lost.”

Former Newcastle United and Trinidad and Tobago International, Shaka Hislop, commented: “The experiences [in the George Floyd video] live out in real time and they weigh heavy. We took the decision, despite the pandemic, to go into battle in the nearest city where we live and join the Black Lives Matter march.”

Shocking figures show that black Americans are 2.5 times more likely to be shot and killed by police. And in the UK during lockdown, London’s metropolitan police carried out 22,000 stop and searches on young black men – which is the equivalent to one in every eight young black men in London.

Labour MP, Zarah Sultana, added: “It’s scandalous that the leading cause of death for young black Americans is at the hands of the police so I absolutely and unequivocally support those who have taken to the streets and said enough is enough.”

Mr Ross added: “There is more of an emphasis now, there is a bigger lock in of people who maybe weren’t that connected with the campaign in the past, or had a passing interest. But now it’s right at the top of the social and political agenda.”

And Humza Yousaf, from the Scottish National Party, commented: “The police have to be willing to engage with the public, putting up defensive walls is the worst thing any police force can do. They have to acknowledge where there is an issue and then they need to rectify.”

He adds: “I see people talking about race now in a way that it has never been talked about before. People want to be educated about it and make a tangible difference. This is definitely a game changing moment.”

Ms Sultana commented: “We know that racism isn’t something that people are born with, it is something that is very much learnt. We know the power of education that can transform lives. We need to make sure that in our curriculum people are equipped for conversations around race.”

And Colin Charvis added: “Principally to drive this ambition for a fair and equal society, if it is driven from below, if our children, our educators, our adults are all beating the same drum when it comes to the anti-racism principles, that is a step forward. We can change and grow as individuals.”

Show Racism the Red Card which was established in January 1996 and is dedicated to combating racism in society through education. It utilises the high-profile status of football and football players to publicise its message and has a 24-year record of producing high quality educational films to combat racism in society.

Ged Grebby, Chief Executive at Show Racism the Red Card, said: “We are dedicated to tackling racism and promoting change in society through education. With this short film, we’re hoping we can again contribute to a discussion around combating rife racism in society.

“However more still needs to be done. As the recent events over the past couple of months show, racism is still very much alive around the world, and we stand alongside all those who are protesting against it.”

Tosca Fairchild, Chair of Show Racism the Red Card and Assistant Chief Executive Officer of North Staffordshire Combined Healthcare NHS Trust, added: “Racism persists in society, in the workplace and in our education systems and targeted assaults on someone based on the colour of their skin are all too common across the world – including at home here, in the UK.

“Show Racism the Red Card has existed for nearly 25 years, with the aim of combating racism in society through the production of high-quality educational resources. We believe that racism in society can be fought by challenging misconceptions, stereotypes and negative attitudes and we continue to deliver educational sessions to more than 50,000 individuals per year at schools, workplaces and events.

“We hope that together we can at least ensure that the spotlight cast on this pervasive issue by George’s tragic loss of life is not in vain, and that we can affect some positive change.”

The video will be available to view on Show Racism the Red Card’s YouTube channel from Friday 24 July at 12pm.